It is the summer of 2004. I’m in the midst of planning a trip to Mesquite, TX for myself and my teammates. This is during a ten-year stint where I traveled the country competing in Laser Quest tournaments. I was scoping out hotels when I remembered that id Software is headquartered in Mesquite, TX. After some diligent internet research, I stumbled upon the address of the office building where they are located. It so happens that it was close by to our preferred team hotel. Things are lining up nicely.

Upon arrival in Mesquite, we drive by the office building on the way to the hotel. It was a non-descript building with absolutely no signage about id anywhere. At first I wasn’t sure we had the correct address, but the presence of an exotic foreign sports car in the parking lot increases the chances we did. Sadly, we wouldn’t be stopping by that day. I go about convincing some teammates to join me on my foolish journey. I’m not sure what I expected to happen at the time, but things seem to have a way of working themselves out.

First, a little background on me so you understand why I’m so excited to even drop by id Software. Like many guys my age, I grew up playing video games. I remember playing Where In The World Is Carmen Sandiego and Tetris on my Dad’s 8088 PC. I was always nagging my Dad for PC upgrades so we could play the latest and greatest game. I even saved up for my first 3D accelerator card. This is back when it was an add-on card to your 2D card. I still love video games, and contrary to uninformed public opinion, I think they teach important life skills. I know video games are responsible for my incredible problem solving ability, which is really important for any skilled job, especially in the software world.

id Software games were a vivid part of my childhood. I played Commander Keen, Wolfenstein 3D, Doom, and pretty much every title they ever produced. I played so much Quake II multiplayer that I was often accused of being a bot for my proficiency with the railgun. Once I started writing software around the age of 10, I looked to John Carmack, Co-Founder and Technical Director of id Software, as a sort of hero. He is an incredibly smart man, and basically invented the first person shooter genre while pushing the limits of technology. If you haven’t read the wonderful Masters of Doom novel, I highly recommend it. The thought of meeting him and other influential people at id made me giddy.

Back in Mesquite, the day of the drop-in arrives. My cohorts and I drive over to the office building. Once inside we check the directory. No id Software listed. This doesn’t deter me since I’m guessing they like to keep a low profile. I wander the hallways of the office building, peeking in windows until I see it: the display case with all the awards, and the toy shotgun that was the model for the original Doom shotgun. I can hardly contain myself at this point. I nervously knock on the front door since it was locked. We wait a bit until we see someone approach from inside. Little did I know that I had chosen the perfect time to drop in. There is normally a receptionist to receive people and keep out unscheduled visitors. We happened to drop by when that person was at lunch. The door swings open and I can’t believe my eyes. It is Todd Hollenshead, CEO of id Software, in the flesh. He asks how he can help us. I explain how we are from Nebraska, are huge fans, and just wanted to drop by and see the offices. He tells us to hold on for a second, and that he may have something for us. 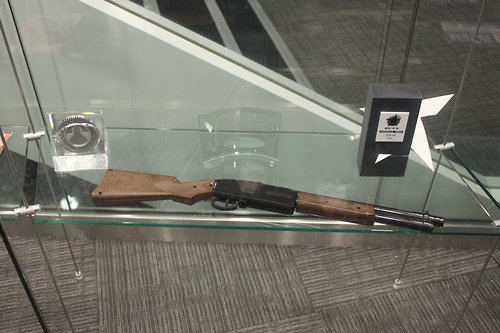 Now I have no idea what is coming at this point. I think he is going to give us some sort of merchandise, or at best an autograph. After a couple minutes, he returns and directs us to the conference room. He then asks us something totally unexpected, “Do you want to playtest Doom 3?” I couldn’t believe my ears. Doom 3 has been in development for years and was slated for release later that summer. Obviously we all hastily agree to playtest. He explains that we would have to sign a NDA, but that isn’t a problem for anyone. The term of the NDA was 5 years, which was quite long considering the game was to be released later that year. (For the next 5 years, that group of friends referred to it as “Oom 3D” whenever we would speak amongst ourselves.) After the legal stuff is out of the way, he says it will be a little bit before they are ready. In the meantime we decide who will play in what order. I also convince a group of employees who were walking by to autograph a Wolfenstein poster, which still hangs proudly in my living room. I ask if Carmack is in the office today, but they say he was working on Armadillo Aerospace. I was disappointed at the missed opportunity to meet John. 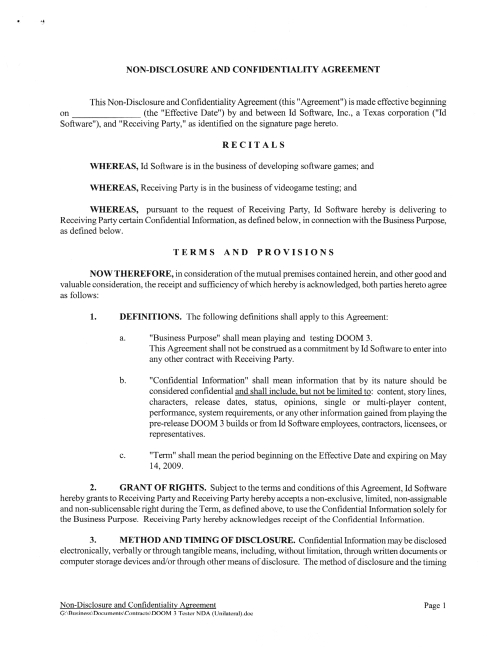 I get the privilege of playing first since I arranged the entire ridiculous thing. I’m lead to an office where a developer normally works, sat down at his desk, and then surrounded by at least 10 id staff members. Intimidating to say the least. They launch the game and ask me to configure it how I like. The staff has to wait while I rebind almost all of the keyboard keys, which I don’t think they were expecting. I prefer to use ESDF instead of WASD for my first person shooters, so this is a common occurrence for me.

Playtesting commences. They have me start the game from the beginning, going through the entire introduction sequence. I don’t remember exactly how long the intro takes, but it is at least ten to fifteen minutes. Finally, I get to start shooting things. I’m doing my best, trying to impress the staff with my skills. I die! I die within 20 minutes of starting the game. It wasn’t even an enemy that finishes me off. It was the environment, which is the most shameful of deaths. Shortly after exiting the room where the possession occurs, you are confronted with a jet of fire blocking your pathway. My first instinct is to find another path. I attempt to jump over the railing directly to my left, but that proves fruitless. I search around for a bit, but find no other way around. I attempt to crouch underneath the column of fiery death and incinerate on the spot. 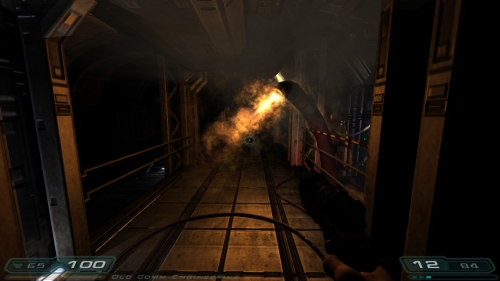 A staff member quickly takes over the keyboard and puts the game into some sort of fast-forward mode and gets me back to the same spot. I can tell they weren’t expecting me to die so quickly. They inform me that you can in fact jump over the railing, just to make sure I don’t die again. I’m feeling quite embarrassed at this point, so I try and not make any more stupid mistakes. I continue playing for a while longer, maybe 20 minutes. I’m doing fairly well, eliminating lots of possessed humans. I’m pretty sure I squeal with joy the first time I unloaded the shotgun into an enemy and watched his brain go flying out. Eventually I succumb to my wounds, thus ending the playtest session. I thank them for the opportunity and head back to the conference room to send in the next victim. That was likely my first introduction to what we now call “usability studies” or “user testing”.

Each of my friends gets their turn at playtesting. Every time someone returns, we compare how our sessions went and how we died. My friend Brian also had an environment death by hitting an explosive barrel with his flashlight. Experienced gamers would have recognized the explosive barrel, but Brian doesn’t play a lot of video games. Everyone seemed to enjoy the experience, and I’m really glad I had the gusto to be that guy and knock on the door.

So how exactly did I end up influencing a map design? If you play the retail version of Doom 3, you can find that spot pretty easily. You will notice something is different from how I described it though. The railing is broken away clearly indicating that you can go that way. I know, pretty minor change right? I believe it is a great example of user testing. The staff had probably played through that part so many times, and knew the route through the map, that it never occurred to them that someone would die there. This is why having a fresh set of eyes on your work can tell you so many things. Video game studios have been playtesting for a really long time, and it is because gamers are so unforgiving. It takes a lot of effort to make a game that is enjoyable and doesn’t annoy the player with the interface. I have nothing but the utmost respect for video game designers and developers.

I want to thank Todd Hollenshead for not turning us away immediately, the id Software staff who autographed my poster, and John Carmack for inspiring me to be the best software engineer I can be. I can’t imagine all the hurdles he faced developing some of the early games. Most of my software problems are probably paltry in comparison, but I still try to solve them the best way possible because of him. 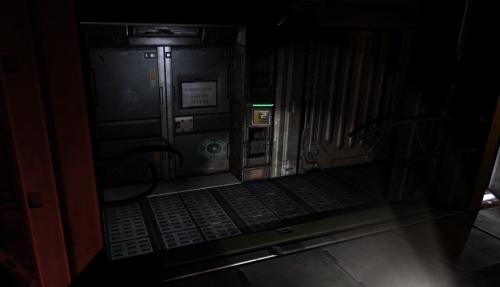 How to refresh Safari in iOS Simulator with your keyboard